Many Bibliomation libraries are adjusting their services at this time. Please contact your local library staff or consult their website for more information about the services they are providing.
Home OWL Staff Picks New To Our Collection Kids Catalog Get a Library Card 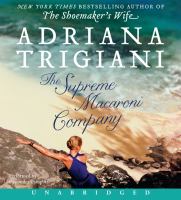 View other formats and editions

View all formats and editions (3)

Search for related items by subject

Search for related items by series

The Supreme Macaroni Company
by Trigiani, Adriana; Campbell, Cassandra (Read by)
Rate this title:
vote data
Click an element below to view details:

Adriana Trigiani grew up in Big Stone Gap, Virginia and graduated from Saint Mary's College in South Bend, Indiana. After graduation, she moved to New York City and founded the all-female comedy troupe The Outcasts, which performed on the cabaret circuit for seven years. She was a writer/producer on The Cosby Show and A Different World and executive producer/head writer for City Kids for Jim Henson Productions. In 1996, she wrote and directed the documentary film Queens of the Big Time, which won the Audience Award at the Hamptons Film Festival. Her debut novel, Big Stone Gap, was published in 2001. Her young adult and adult novels include Big Cherry Holler, Milk Glass Moon, Home to Big Stone Gap, The Queen of the Big Time, Rococo, Encore Valentine, Viola in Reel Life, The Supreme Macaroni Company, The Shoemaker's Wife, and All the Stars in the Heavens. She wrote the film adaptation for her novels Big Stone Gap, Very Valentine, and Lucia, Lucia. She also wrote a cookbook entitled Cooking with My Sisters and a non-fiction book entitled Don't Sing at the Table: Life Lessons from My Grandmothers. (Bowker Author Biography)